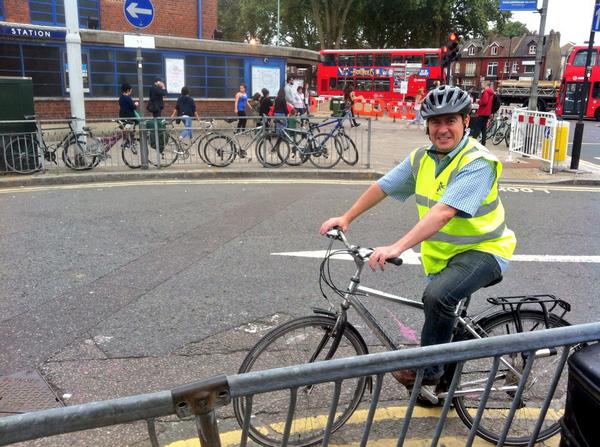 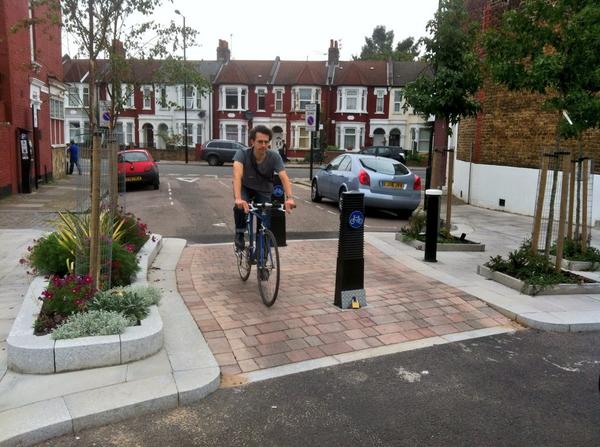 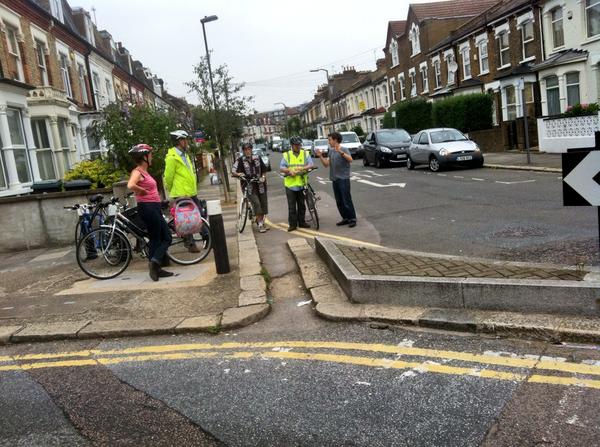 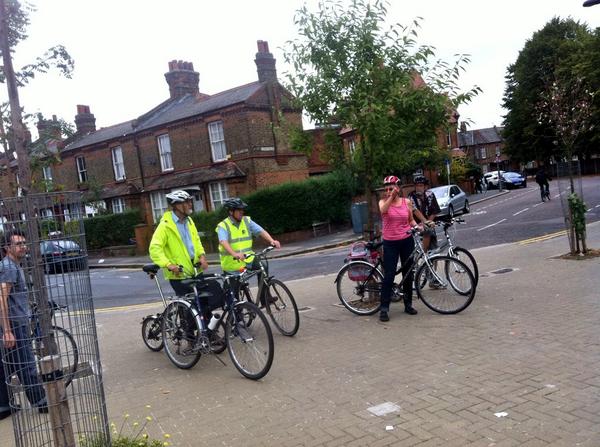 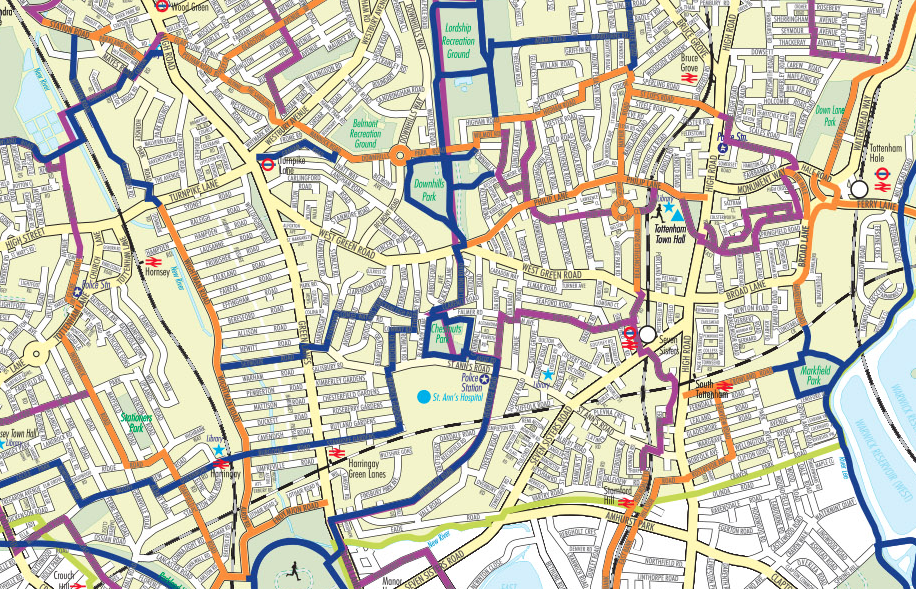 We’re off on a ride with local residents and Cabinet Member for the Environment – Councillor Stuart McNamara (one of our members is kindly loaning Stuart a bike for the occasion!)

There’s so many places to take Cllr McNamara, but here’s the route we’ve agreed, to take in as many ‘problem spots’ as possible in the time available: 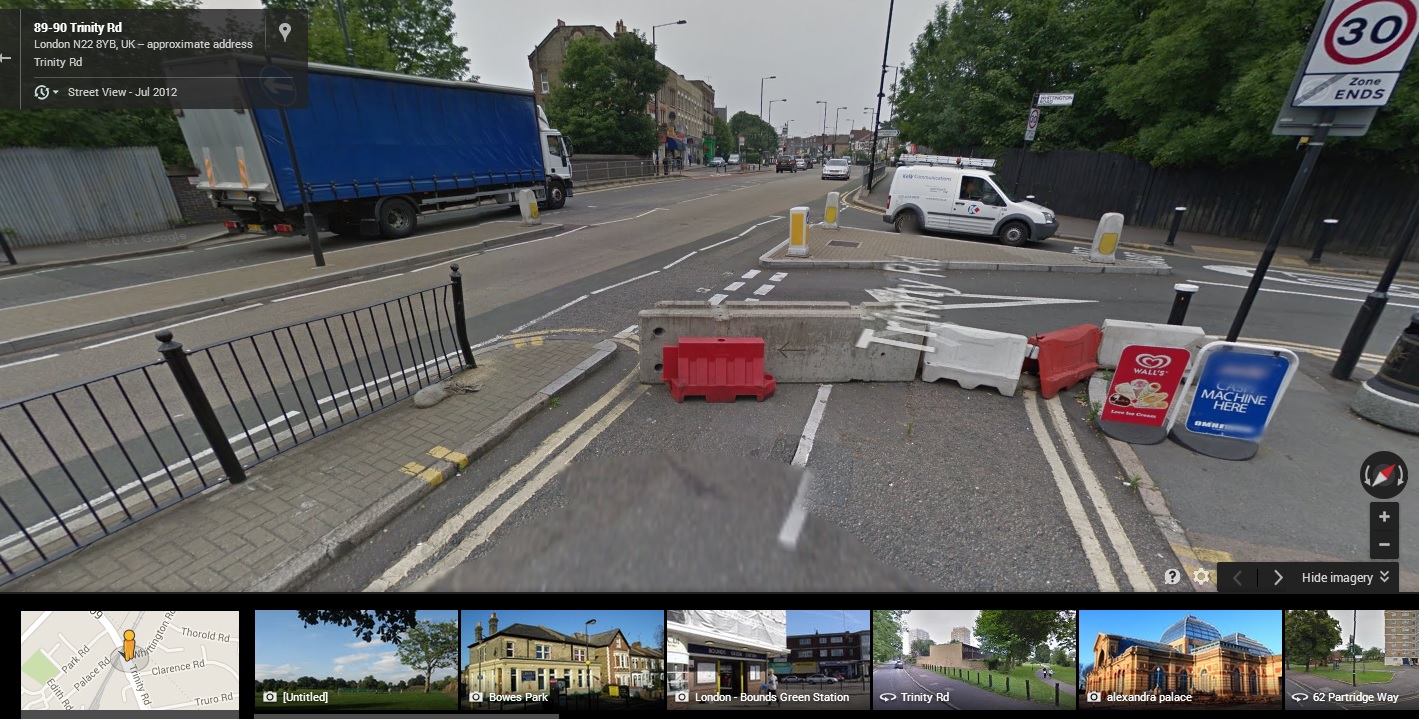 Haringey Council are now making a concerted effort to consult Haringey Cycling Campaign on all schemes which include a cycling element. You could argue that all road schemes involve cycling, but we don’t have the capacity to review and respond to everything!

We’ve been sent drawings of plans to block off the end of Trinity Road, adding a paved area. There is a proposed cycle lane across the area where the buckled barrier is shown below, but we think it won’t get used because the turn is too tight off Bounds Green Road.

Do you live near, or use the junction below?

Would you like to see the plans and give some feedback?

Email haringey@lcc.org.uk with ‘Bounds Green Rd/Whittington Rd/Trinity Rd junction’ in the title and we’ll add your feedback to our response. 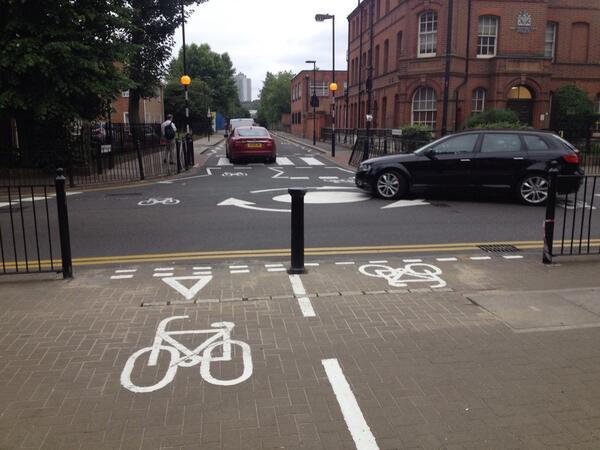 We meet with Haringey Council at least every 3 months.

We keep an ongoing ‘Top 10’ list of improvements we’d like to see made in the borough. In reality, of course, the list is much longer. In fact, in light of our part in our recent ‘space for cycling’ campaign in Haringey, we now have a Top 29.

St Ann’s Road/Hermitage Road new cycle entry on to roundabout which we campaigned for.

Here’s what is going on during Bike Week in Haringey…

(all events below organised by Haringey Council unless otherwise stated)

The Festival of Cycling,  is on Sunday 15th June.   This is a tri borough event with Hackney and Islington Council’s celebrating all things cycling.  We hope to see you there.

Bring your bike along for a tune up with our free Dr Bike maintenance at tube stations between 4pm and 7pm:

We will also have an information and advice stall and a Dr Bike at Stroud Green School for their Fete on Saturday 21st June – 12-4pm along with a Dr Bike.

And we have our Smarter Travel Road Show providing information and advice on walking, cycling, public transport and greener driving along with a Dr Bike at Chestnuts Park on Sunday 22nd June for the Shakhsiyah Foundation Fun Day & Sports Day from 12-5pm.

Join us on Sunday 27th April to ride the newly two-way Broad Lane, to celebrate the removal of the infamous Tottenham Hale Gyratory system.

It is our very own Day ‘H’ in Haringey. Join us on your bike or trike, and meet some fellow Haringey-ites when we have afternoon tea afterwards.

Meet at 3.30pm at the Markfield Park Cafe , returning to the same point after a short group ride.

The cafe has the red roof in the photo below – see you there! 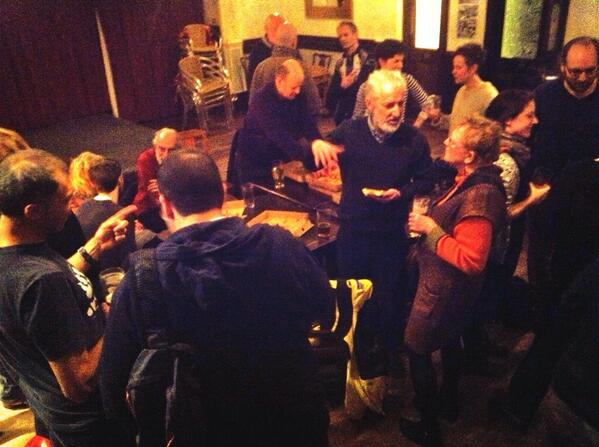 It was great to meet so many new (and some more familiar) faces at our New Year Social last Monday. We think it’s fair to say a great time was had by all. Big thanks to The Great Northern Railway Tavern for being a wonderful venue, Tomo for the delicious pizza, and Albert the pub husky (wolf) for looking like a massive teddy bear by the fire.

We look forward to seeing you again soon!

The Statutory Overview and Scheme overview Document (the plans unless any objections) can be viewed here:

As mentioned by Geoff on Harringay Online ”This is the one opportunity to have a close look at all the detail and to make constructive comments.”

Views and comments are invited and welcomed and the closing date for these is Friday 21st June 2013.

‘If no major objections are received’, works are planned to start in July/August 2013 and will last 9-12 months.

A number of people have enquired about what the proposals include for cyclists? Well, here’s our letter to the Major Schemes Project Manager:

Thank you for your email of 5th June.

The report of consultation on this scheme confirmed:-   “Cyclists do not regard either Green Lanes or Wood Green as cycle friendly, but Green Lanes is seen as offering a more adverse cycling environment than Wood Green”.

Unfortunately nothing, apart from new cycle parking, is included in the proposals to address this.  The consultation also confirms 9% of trips to the Green Lanes centre are by bicycle, compared with 10% by car.  The available car parking is already fully used and there is no scope for increased provision, so encouraging cycle use is a “near market” which can benefit local shops, who of course are in competition with supermarkets, with large free car parks.

Haringey Cycling Campaign participated in the initial consultation on this scheme and proposed improving cycle access by ending one-way traffic restrictions for cyclists on local roads.  Most of the “Ladder” roads are presently one-way.  As many are long roads with a considerable gradient, this discourages cycle use.  There are also recommended “London Cycling Guide” cycle routes converging at the end of St Annes’s Road.  As illustrated in the Scheme Overview cover, cyclists use this route and cut through to Green Lanes in front the “Salisbury” pub.  HCC suggested this be allowed for in the scheme, but there is no indication of dropped kerbs, or shared use, to allow this.  There is also no indication of how cyclists are to access the one existing contra flow cycle lane at Colina Rd.  Clarification of the proposed work here and at the St Anne’s Rd junction is essential.  Please see below an extract from the TfL London Cycling Guide, showing local routes.

No doubt one reason for the ending one-way restrictions not being included in the proposals, is the consultation finding that a majority of interviewees were not in favor of cycle contra flow.  This very much depended on how the question was asked.  Cycle contra flow is a relatively new concept in this country, with very few examples in Haringey.  As such, many people might think it sounded unsafe and would instinctively be worried about it.  If it the question had been put in the context of a strategy for environmental improvement and reducing traffic congestion, supported by illustrations from Denmark and Holland, I am sure the results would have been different.

Simpler ways of providing cycle contra-flow with fewer signs and markings were enabled by amendments to the regulations introduced by the DfT in 2012.  Pro-cycling boroughs such as City of London and LB Camden are already taking advantage of this by implementing cycle contra-flow as standard on their one-way streets.  Haringey will not compare favourably with these boroughs if they do not take this opportunity do the same.   At the very least future ending of one-way restrictions should be allowed for in the current work, so HCC propose that all the new road narrowings have an adequate width for cycle contra flow (4.5m).  In this way the work would be “future proofed”.

The plans note that existing road markings not shown, are to remain, implying the existing bus lane is to be retained.  HCC welcomes this (the overview could be clearer on this point).  In addition, although pavement widening is mentioned under “General upgrade and renewal” it is understood there is to be no realignment of kerbs to the main thoroughfare.  This opens up the possibility of a northbound 2m width cyle lane to operate at the present times when car parking is not permitted.  This would be a great benefit to cyclists and with a good width slower cyclists will not be intimidated and are more likely to “stop and shop”.

I look forward to your response.