Ahead of May’s local elections, we wrote to the leaders of the main parties in Haringey to ask for their support for our ‘5 asks’. These are 5 specific requests that, if implemented, will help achieve our vision for a Haringey where it’s safe and enjoyable to walk and cycle.

Labour, LibDems and the Greens have all pledged to support our asks – between them, these parties received 92.5% of the votes cast in Haringey in 2022 – read their detailed responses here.

Haringey Cycling Campaign (HCC) calls on Haringey Council to commit to safe, enjoyable cycling for all and to guarantee that all new cycling infrastructure conforms to national guidelines (LTN 1/20) and is safe enough to be used by families and schoolchildren.

We have set out below our top five priorities for cycling in Haringey for the next four years which we would like each party to unconditionally endorse (i.e. not subject to external funding) by including them within their manifesto for the upcoming local elections (May 2022).

HCC’s Top 5 Priorities to be delivered and operational no later than May 2026:

‘Daddy, can we please cycle to Finsbury Park again this weekend?’ 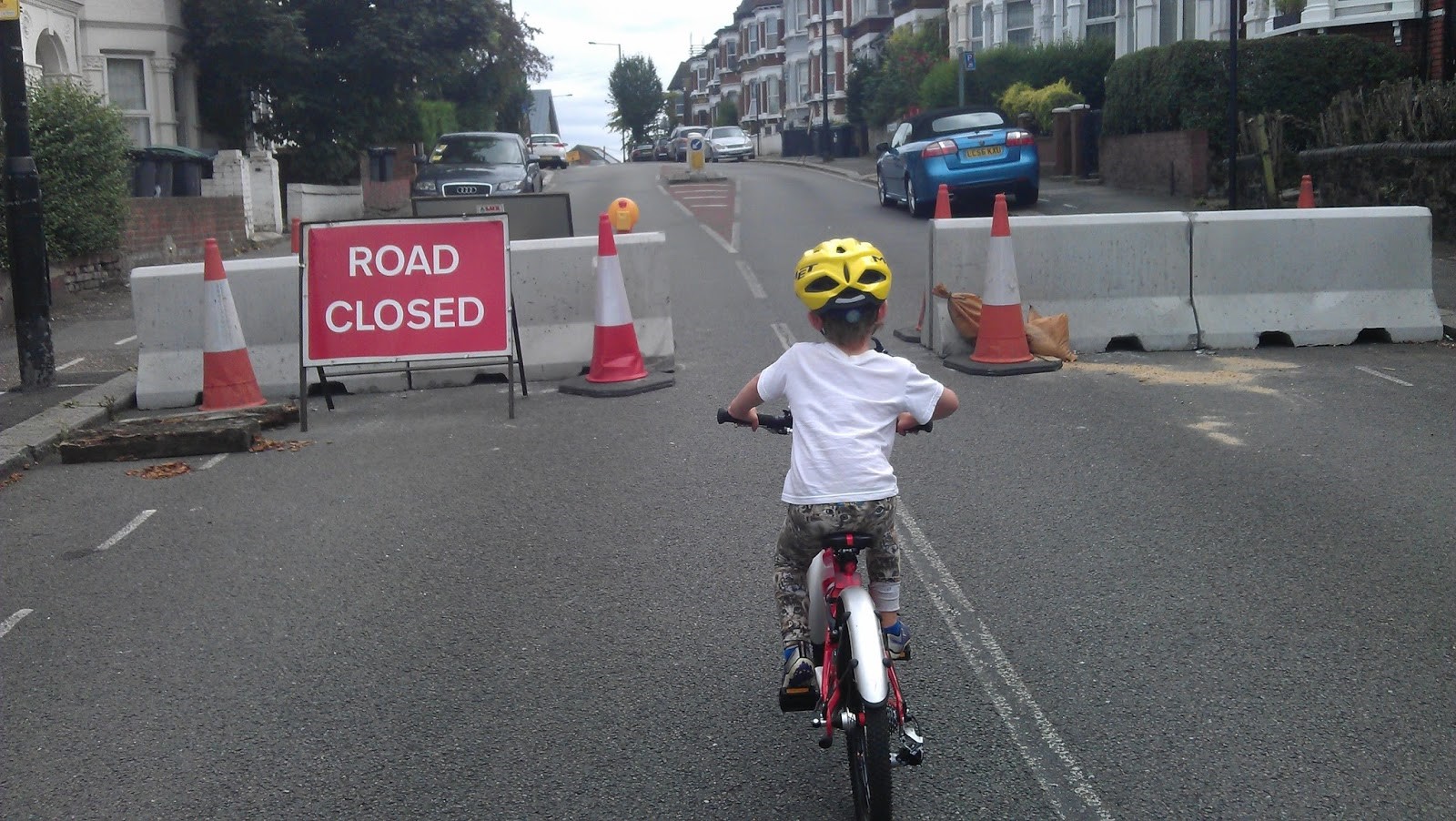 Last summer extraordinary things happened in one part of Haringey. It was a summer of fun for kids: on roads and streets where before there was only bad air and road traffic noise, now there was the sound of kids playing out. Street football was a daily occurrence, children were using the road to cycle to school and there was even the occasional lemonade stand. It wasn’t just children who were joining in with being more active. Adults across this large area realised they didn’t really need the car for their shorter journeys – walking was nearly as fast and made them feel pretty good now the air was cleaner. Cycling to Finsbury Park to pick up the tube was quicker than the bus and nicer than cramming onto the packed trains, and getting there on a bike suddenly seemed easy now the journey could be done mostly without having to ride with speeding traffic.

Surely this was all the work of a council fully committed to the health of their residents, the sort that would make bold claims about making their borough the most liveable in London? Sadly this utopia did not last. While other boroughs nearby were permanently closing roads to through traffic to entrench a new, healthier lifestyle in their boroughs, Wightman Road and its adjoining roads were reopened as through routes for motor traffic. The weekend bike rides to the park had to stop.

‘I’m sorry. There’s no safe way to cycle there now’.

As a cycle campaign we are of course primarily interested in high quality provision for cycling that allows anyone to feel confident using a bike to get around. This has been the focus of our continuing engagement in the Green Lanes Area Transport Study. There are many ways to achieve this but many options that improve conditions for people on bikes also have much wider benefits for those in the area – even if they never cycle. For example making areas more healthy and liveable, reducing air pollution and even reducing journey times for drivers by lowering overall traffic levels and simplifying routes. If you live in or travel through Harringay or the Green Lanes area, you have until Sunday to complete the council survey on future options for Wightman Road and the surrounding area. We believe this is an issue primarily for local people to decide, so please take a look at Living Wightman’s advice on how to complete the survey. While some of the options presented can deliver a suitable cycle route (in particular we recommend you support the proposal for a northbound cycle track on Green Lanes, desperately needed in an area with no safe north/south routes), the option to ‘filter’ Wightman Road will deliver multiple health and air quality benefits as well as a safe route suitable for all-ages cycling. Many parts of this borough are already ‘filtered’ to through traffic. Other boroughs which are right next to Haringey are showing how such schemes, if well managed, can reduce traffic over a wide area. The use of Wightman Road as a conduit for through traffic has negative consequences for the areas to the north and south that also have long-standing issues with excessive through traffic.

The council’s response to the issues encountered on Wightman Road is a real test for them – are they serious about tackling pollution and unlocking the massive potential for active travel in this borough? Or, as suggested by the recent consultation on the Wood Green AAP, is the future of our borough just as polluted, congested and unhealthy as our present? This is your chance to tell the council what sort of place you want this borough to evolve into. Don’t miss the chance to have your voice heard.

Transport for London are currently consulting on changes to the A10 at Bruce Grove (from the rail station south to Forster Road). The consultation is open until 7 December, please have your say via https://consultations.tfl.gov.uk/roads/bruce-grove/

These proposals were discussed at Haringey Cycling Campaign’s monthly meeting on the 14 November. Unfortunately, we found very little to recommend from a cycling perspective. The junction treatment outside Bruce Grove station is likely to benefit pedestrians and to a lesser extent those on bikes. However, in our view the remainder of the proposed work would decrease safety for people cycling, and as such we are requesting TfL go back to the drawing board and come back with something much better. Our reasoning is set out below – you may wish to raise these points in your response. Remember the consultation closes on 7 December!

The proposals include a dangerous and unnecessary pinch point
The new signalised pedestrian crossing proposes to narrow the existing carriageway width to 3m in each direction. We object to this creation of a pinch point, which seems unnecessary for pedestrian safety as the proposed crossing is signalised. We are concerned that the proposed narrowing will increase conflict between road users – in theory cycles should “take the lane” to prevent dangerous overtaking but this would only be a sensible approach on a road with light volumes of traffic travelling at low speeds. For what we think are obvious reasons, this approach is not applicable to this situation.

Proposals remove existing cycle provision
There is an existing cycle route (LCN 54) that crosses the High Rd at St Loys Rd. In 2003 and 2006 detailed proposals were made, but not implemented, to upgrade this crossing. There are presently cycle reservations to the north and south of the junction, which are at least some assistance in crossing the High Road. The present proposals include the removal of the south reservation and this is not an acceptable alteration as no replacement provision is shown.

Current proposals are incompatible with increasing cycle numbers
A 2007 Transport for London scheme for the A10 from Monument Way to St Loys Rd, consulted on but not implemented, included cycle lanes. There remains ample road space for comprehensive cycle provision. Indeed, as part of implementing Mini Holland, Enfield are currently consulting on a proposal for protected cycle tracks on the A1010 up to the Haringey border. Cycle Superhighway 1 does not provide a suitable alternative route, particularly with the decision not to filter through traffic on Broadwater Road. The A10 at Bruce Grove is and will remain heavily used by cycles: Planning policy for Tottenham regeneration seeks to reduce private car use and improving cycle provision in Enfield and Waltham Forest means that the ambition for the A10 should be as a main cycle route.

We therefore urge that these proposals are either redesigned or not taken forward as part of this scheme.