This is a marshalled group walk and wheel and cycle ride for everyone, including families with children. We will set off from Chestnuts Park cafe, going around St Ann’s and West Green, finishing by The Hub cafe in Lordship Rec.

We will proceed slowly and you are welcome to join in on foot, wheelchair, bike or balance bike.

This event is organised by Haringey Cycling Campaign, together with Haringey Living Streets, to enable people of all ages to explore St Ann’s and West Green and some of the quieter roads.

Register here for the walk + ride

On the Tuesday after Christmas eighty plus people, young and not so young, responded to an invitation to “work off the Christmas pud” by taking part in a community bike ride around traffic calmed streets in Bounds Green and Bowes.

The quiet streets in the Bowes and Bounds Green LTNs make it safe for kids to take to their bikes.

The festive bike ride criss-crossed the boundary between Haringey and Enfield, two boroughs that have been taking measures to encourage their residents to adopt healthier ways of getting around – walking and cycling – by preventing cars, vans and lorries from cutting through residential side streets.

A vision of safe, healthy and people friendly streets

The community groups that organised the ride also straddle the borough boundary: Haringey Cycling Campaign and its sister organisation Enfield Cycling Campaign were joined by the Haringey branch of Living Streets, the UK charity for everyday walking, and by Better Streets for Enfield, whose vision is for the borough’s streets to be safe, healthy and people-friendly.

The ride was also a great success for two local bike-friendly businesses. The Prince in Trinity Road opened early for pre-ride coffees and post-ride lunch, and Hot Milk Café, near Bounds Green station, opened specially for the half-way break – both did a roaring trade.

Adrian Day, co-ordinator of the two Enfield groups, was struck by the diversity of the people who turned out for the ride:

“There was a good mix of ages, including many young people and a couple of people in their seventies, and we had Turkish-speakers from Edmonton-based Londra Bisiklet Kulübü, members of women’s bike group JoyRiders, and a cute dachsund. We had a good reception too from people along the route, who smiled and waved as we rode past.”

“It was so nice being part of a big gang, I felt like people cared about me. And it was fun. I see why you like cycling now.”

Thanks to Basil Clarke from the Palmers Green Community webpage for the ride report.

Enjoy a family-friendly marshalled ride, meeting at 11am on Sunday 20 Nov by Lordship Rec model traffic area, through Bruce Grove and Tower Gardens via Bruce Castle, finishing back at Lordship Rec. Full details and link to register here.

Saturday 18 June, 12-2pm, Pond Square, Highgate N6 6BS.
This will be a relaxed family cycle event on Pond Square with live music and you should definitely visit if you/your child would like to:

Everyone is invited to bring their bikes and show off thier skills! We look forward to seeing you for and afternoon of cycle inspiration.Please share this email with friends, who are interested in cycling in North London.

The event is inspired to campaign for extension of the segregated cycle lane from Hampstead to Highgate. Highgate has a high pupil population. The cycle lane would allow them to travel independently and safely to school. 23.1% of children in Haringey (2016) aged 10-11 years were classified as obese. This high figure will have likely increased following the pandemic.
Please sign the petition on the link below, if you are supporting a continuous cycle path between Hampstead and Highgate.
https://chng.it/nm75pfYz

Haringey Cycling Campaign group were delighted to be joined on 27th April by five key candidates in the coming local elections on 5th May. Mike Hakata represented Labour and is Haringey Council cabinet member for environment, transport and the climate emergency, as well as deputy leader of the council. He was joined by Scott Emery from the Liberal Democrats, Pamela Harling and Tom Hoyland from the Green Party and Claudia Matthews from the Conservative Party.

Together, they took a somewhat chilly tour around local streets, beginning on Wood Green High Road, that took in the good, the bad and the ugly in terms of traffic and cycle safety. The town centre proved a fairly hostile start, with multiple vehicle lanes and parking, yet no space for cycling, and difficulties for pedestrians to boot. They cycled on to see how some cut-through, rat-run side streets had been transformed into safer, cleaner spaces for residents, pedestrians and cyclists alike. These included well thought out, ‘quick wins’ such as spaced bollards that allowed accessibility whilst limiting traffic, as well as school streets such as the new one at Belmont Junior School.

Some of the changes would still benefit from tweaking, such as the dangerous cycle contraflow down Broadwater Road, or staggered barriers that could still let mopeds through but which might impede those with accessibility issues. There was one tense moment when a bus came a little too close to one candidate whilst they were trying to use a designated cycle crossing, and this demonstrated the journey ahead in terms of cycle safety for those who wish to use cleaner, active transport in the future.

Much is being promised in the future by candidates through London and some exciting commitments have been made. In Haringey, we’re delighted that Labour, the Liberal Democrats and the Green Party have all pledged to commit to key Climate Safe Streets asks. These include protected cycle routes and Vision Zero, with the aim of eliminating all serious cycle injuries caused by motor vehicles.

Other boroughs have also focused on inspiring action plans so, for example, all four main candidates in Hackney have committed to making it safe for every child in that borough to cycle to school by 2026 – this would entail more than school streets, ensuring safe routes along their entire journeys. Imagine a borough with limited school-run traffic, where kids get fresh air and safe exercise before they sit at their desks for the day…

Climate change and overcrowded streets are two issues that won’t go away and won’t be solved overnight. The cycle tour allowed key Haringey candidates to witness at first hand the reality for people who want to cycle in Haringey and to, hopefully, acknowledge that such a healthy, sustainable form of transport deserves focus, funding and a future.

Elections for Haringey Council are taking place on Thursday 5 May.

Come and quiz the local parties on their active travel, environment and climate commitments at an online hustings event on Tuesday 12 April 7.00pm to 8.30pm.

This is a key way to show candidates the support for making active travel, climate change and the environment a top priority.

Organised by Friends of the Earth, with support from Sustainable Haringey, Haringey Cycling Campaign and Haringey Living Streets.

Watch a recording of the hustings here
Email your candidates – takes less than a minute!

Meet Finsbury Park – inside Manor House entrance – 10.30am for 11am departure to Downhills Park, where the local café will be pleased to serve you!

The ride will be marshalled and will be safe for families with children. The group will walk/cycle from Finsbury Park along Green Lanes, down Hermitage Road, through Chestnuts Park, and will finish at Downhills Park.

Fires, floods, and droughts are ravaging our planet – and scientists are clear that man-made climate change is the cause.

What can we do? The science is clear – we must cut our use of fossil fuels like petrol very quickly to limit the climate catastrophe.

That means replacing petrol and diesel lorries, buses, vans and cars with ones that run on electricity or hydrogen (over 4,000 London buses are now pure electric or hybrid- a step in the right direction).

But it also means reducing how much we drive, and we need to start that now. That will cut our use of petrol and diesel quickly. Plus, it will reduce the air pollution that stunts our children’s lungs and causes thousands of early deaths in London each year.

So we call on Haringey Council to speed up its introduction of better and safer walking and cycling routes, introduce a borough-wide walking network with wider pavements/additional crossings, safe cycle routes for all ages and abilities to travel around the borough, reduce traffic deaths, enforce speed limits across the borough, and reduce overall numbers of journeys by car.

And we call on our fellow residents to help this by:

What would help you to walk and cycle more or drive less? Let us know by emailing Haringeygroup@livingstreets.org.uk 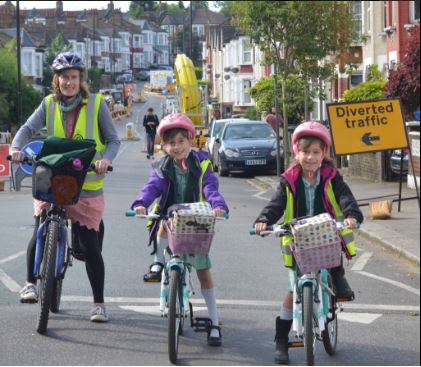 Current bridge replacement works on Wightman Road, N8, have shown how closing a road to through motor traffic can make a place where children can play in the street, neighbours stop for a chat and families can cycle together safely.

To celebrate the rebirth of this residential community, we have teamed up with ‘Living Wightman’, a local community movement working towards a better future for Wightman Road and the Harringay Ladder. For the morning commute on Monday 13 June (7:30 – 9:30) we will hold a Bike Week ‘bike breakfast’ on the north side of the bridge works on Wightman Road.

Look forward to seeing you all on Monday!