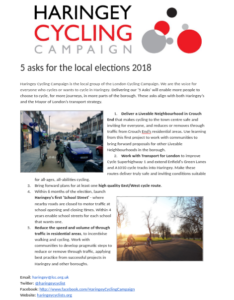 Ahead of this May’s local elections, we have written to the leaders of the main parties in Haringey to ask for their support for our ‘5 asks’. These are 5 specific requests that, if implemented, will help achieve our vision for a Haringey where it’s enjoyable and safe to walk and cycle for all your local trips, there are relaxing places outside where you can watch the world go by, chat with your neighbours, and children can safely roam and walk or cycle to school.

Our key ‘5 asks’ (pdf available here, with more detail further down this page), have been developed alongside our members. Commitment to delivering these ‘asks’ is a clear demonstration of willingness to create areas where everyone can walk and cycle safely and happily, which will make our air cleaner and safer, make residents healthier, get children moving, build stronger communities and keep our borough moving. 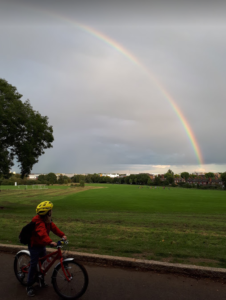 You can help by following us on Twitter, liking our Facebook page, and commenting on and retweeting our asks. Maybe copy your ward councillors or candidate councillors into your tweets to get a discussion going! Supportive posts on local area forums are also very welcome. In the run-up to the election, candidates will be looking for your vote – tell them how important these issues are to you and how delivering our 5 asks will improve your local area. Improvements for cycling in Haringey are much more likely to happen if YOU get involved and help push to make things better!

We will be listing responses here when we get them. Check back for (hopefully!) some positive responses!

Councillor Liz Morris confirmed by email on 18 April that: ‘As a group we [Haringey Liberal Democrats] support the aims of Haringey Cyclists and we support your “ 5 asks”’.

Haringey Green Party have confirmed their support for our ‘asks’, noting the following specific responses to each ‘ask’:

A. Deliver a Liveable Neighbourhood in Crouch End.  We welcome the fact that the council has won funding for this and will work hard to make helpful suggestions and consult with all interested parties to see that the project is successful and then used as a model in other areas in the Borough (particularly in the east of the Borough).

B. Work with Transport for London to improve Cycle Superhighway 1. As a cyclist who uses part of this route on a regular basis, I can confirm how very dangerous the route is in a number of places.  If we are going to encourage cycling in the Borough, we need safer cycle routes (preferably segregated from traffic) and a Green party councillor will campaign for these.

C. Bring forward plans for at least one east/west cycle route across the Borough. A Green party councillor would press for early consideration of this and would like to work with Haringey cyclists to suggest a route.

D. Launch a school street within 6 months of the election.  As part of our air pollution campaign, the Green party will be pushing for this.

E.  Reduce traffic speeds to encourage walking and cycling.  A Green party councillor will be looking at the Liveable Neighbourhood template to use as a model for making streets safer for pedestrians and cyclists.’

The Haringey Cycling Campaign responded in detail to the consultation on the draft strategy and we took many of their points on board. We thank them for their time and passion they have shown.

In relation to the specific five pledges:

Pledge 1: Haringey Council led by Labour have got the funding for the Liveable Neighbourhood initiative in Crouch End.

Pledges 2 and 3: on cycle routes depend on external funding but we are keen to encourage cycling. A Walking and Cycling Action Plan will be issued later in this year for consultation.

On pledge 4: about School Streets, Haringey Labour Councillors have visited a Camden school to view one in action and we have identified a Haringey primary school where we want to close the road outside the entrance for 45 mins in the morning and 45 mins at close of school. This will be subject to consultation with local residents.

Pledge 5: about reducing the speed and volume of traffic in residential streets is consistent with Haringey Council’s transport strategy, though challenging to achieve but it’s something Haringey Labour, if elected, will strive to accomplish.

1. Deliver a Liveable Neighbourhood in Crouch End that makes cycling to the town centre safe and inviting for everyone, and reduces or removes through traffic from Crouch End’s residential areas. Use learning from this first project to work with communities to bring forward proposals for other Liveable Neighbourhoods in the borough.

4. Within 6 months of the election, launch Haringey’s first ‘School Street’ – where nearby roads are closed to motor traffic at school opening and closing times. Within 4 years enable school streets for each school that wants one.

5. Reduce the speed and volume of through traffic in residential areas, to incentivise walking and cycling. Work with communities to develop pragmatic steps to reduce or remove through traffic, applying best practice from successful projects in Haringey and other boroughs.

Further detail on our asks:

1. Haringey’s successful bid for Liveable Neighbourhood funding from TfL is a hugely exciting development; if delivered to a suitable quality the bid will unlock huge suppressed demand for cycling and walking in Crouch End, and provide a template to deliver a shift to active travel and better places across the rest of the borough. We want to see proposals that will enable all-ages and all-abilities cycling to the centre of Crouch End so everyone feels that cycling is a safe and easy choice for their journeys to Crouch End’s shops, cinemas, cafes and pubs. Whilst there is a lot to commend in the detail of the initial bid, the proposal to place part of the cycle route on back streets away from the town centre introduces flaws that will discourage, rather than enable, visiting Crouch End by bike. It was also disappointing to see the proposed modal filters appear to merely discourage, rather than eliminate, through traffic from using some residential roads, including a road that forms part of the proposed Quietway 10 cycle route. As recommended in a recent London Assembly report, boroughs should put forward Liveable Neighbourhoods plans on an ongoing basis. Communities across Haringey would benefit from securing further Liveable Neighbourhoods funding for their areas, and local people should be encouraged to bring forward and develop plans alongside local councillors and council officers.

2. All-ages cycling is now possible from Enfield Town to Palmers Green, enabling anyone who wishes to do so to choose to cycle along Green Lanes as far as the Haringey border. The delivery of this project has also provided considerable street scene improvements, as well as enhancements for pedestrians and bus passengers. The Mayor’s Walking and Cycling Commissioner has praised the positive health impacts of the scheme, and suggested that the Mayor is in favour of further roll-out of such schemes. Haringey must seek to hold the Mayor to his promises and work to extend the Green Lanes cycle tracks into the borough, so that people in Haringey can also access the same benefits that Enfield’s newly healthy streets are delivering. Separately, the Mayor of Hackney has indicated Hackney Council will seek to provide protected space for cycling on Green Lanes in Hackney. Haringey must not be left behind and must bring forward plans to make Green Lanes a safer, healthier street fit for the community it serves. Enfield Council is also working to deliver a cycle route along the A1010 up to the Haringey border – this should be extended to join up with Cycle Superhighway 1 (CS1). In tandem with this, CS1 must be upgraded to provide a safe, continuous cycle route within the borough – it is currently a ‘superhighway’ only in name. We have discussed potential improvements with the Mayor’s Walking and Cycling Commissioner. The existing route could be made useable to all ages and abilities by measures to remove through traffic from selected residential roads, and provide protection along, or when crossing busier roads. Haringey should press TfL to fund improvements to CS1 to provide a route of the quality of other cycle superhighways in London, which is no less than the people of Tottenham deserve. In the longer term we suggest the council works with TfL to review the effectiveness of the current route alignment, and seek opportunities to reallocate road space on the A10 for cycling and walking.

3. As identified in the council’s own Cycling Scrutiny Review, the borough currently lacks an east-west route of suitable quality. Over the next four years this must be rectified to provide a high-quality route particularly focussed on the Tottenham-Wood Green corridor. TfL’s Strategic Cycling Analysis has identified two routes on a north east-south west axis where high quality provision for cycling will unlock considerable suppressed demand for cycling. There are also existing cycle routes on borough roads that could be upgraded to ‘quietway’ standard with traffic calming, through traffic removal and protected crossings of main roads.

4. Haringey’s neighbouring councils of Camden, Waltham Forest, Islington, Enfield and Hackney have all launched, or shown their intention to launch, ‘school streets’, which close selected roads near to schools for a defined period around school opening and closing times. Where these projects have been implemented, they have been hugely successful in enabling a mode shift in school travel away from the car, improving safety and air quality for students and even allowing for impromptu after-school street play sessions. Students who are usually driven to school benefit from the short walk from their drop-off point, with even moderate levels of active travel proven to increase academic attainment. Haringey must rapidly move to bring these benefits to its young people too, and should look to implement its first school street as soon as possible after the election, with other willing schools being offered support to deliver their own school streets as soon as possible afterwards.

5. Many neighbourhoods in Haringey remain blighted by excessive speed or volumes of through traffic, to the detriment not only of walking and cycling but wider public health impacts. This is a social justice issue that impacts particularly upon younger people who are denied the opportunity to cycle safely or play outside their homes, and older people who feel they can no longer compete with the demands of cycling amongst (often aggressive) motor traffic. These missed opportunities for active travel are enormously detrimental to public health. Through traffic in residential areas imposes a variety of poor health outcomes, and consequently cost, upon local authorities and health providers. These poor health outcomes include, but are not limited to, air quality, noise pollution, community cohesion and mental health through social exclusion. Haringey has historically engineered many areas of the borough to remove through traffic, but work to extend these low-traffic areas across the borough has been stalled for many years. Recent evidence from other boroughs is clear that such schemes, when implemented and managed appropriately, lead to less traffic congestion, fewer overall journeys by motor vehicle, a mode shift towards walking and cycling, benefits for local economies and negligible traffic displacement. Haringey must work alongside communities who feel blighted by through traffic and set out plans to identify appropriate funding mechanisms to deliver healthier local streets within defined timeframes agreed with local people.